Melting Pot of Swing and Soul
Born and raised the Bronx's Castle Hill neighborhood, DeJesus credits his hometown with having influenced his eclectic taste in music. "Growing up in New York is probably one of the greatest advantages I've had," DeJesus said, "I remember living on the 17th floor of a building where, if I stuck my head out one window, I could hear somebody driving by playing salsa music; and if I stuck my head out the window on the other side of the house, I could hear the neighbor playing Motown. From another window, I could hear the kids downstairs practicing breakdancing moves to early Hip Hop records. And if I was in the kitchen, I could hear the next door neighbor blasting reggae music through the wall."

Inspired at a young age by Hip Hop DJs on the radio and at local block parties, DeJesus eventually landed a job as a tracking engineer at a premier Hip Hop recording studio, where he honed his ear and gained familiarity with one aspect of engineering that would come to inform his signature mixing style.

"If you ask me, some of the best mixers are the guys who also know how to track," DeJesus said. "I'll get a session, and from my experience as a tracking engineer, I can hear how something was miked up and what positions they might have used. This helps me know how to mix it. Sometimes tracking engineers might mic things in a way that doesn't capture the essence of what could have been. So, I find a way to try to bring that essence out."

In addition to his experience as a tracking engineer, DeJesus says that his cross-cultural upbringing became an integral part of his perspective when he started mixing tracks in the emergent Latin Urban genre. "A producer once told me, 'Hip hop and R&B have soul; Latin music has swing.' And I always try to keep that in mind — one makes you move in a different way than the other. "When you grow up in New York surrounded by Puerto Rican culture," DeJesus continued, "they call you 'Nuyorican.' I consider it a term of endearment, and I've always worn it as a badge of honor, because I look and see that I have the best of both worlds — I have swing and I have soul."

Finding the Concept: Mixing Mentalities
Renowned in the Latin Urban genre for marrying various musical styles from the upper East Coast down to Miami and the Caribbean, DeJesus has likened his role as a mixing engineer to that of a surgeon. "It's kind of like being a doctor in the emergency room," DeJesus joked. "A record comes in and I ask, 'OK, what happened here? What am I dealing with?' And it's funny because most clients who come in really do treat it like an emergency."

Working at the convergence different stylistic currents can be, "a little tricky," DeJesus admits, citing some of his recent work with producers who are combining 808-style R&B with tropical Latin styles. "You have all the low-end from the 808s, but on the same song you have a Fender bass player, too. The weird thing is that it changes between sections – so, I'll have an 808 in the middle of the song, but at the end, it's not there, and it goes to straight hard tropical. It's like I have to mix in different mentalities and find a way to blend them into one another in a way that's appealing to the ear."

But even with his multi-genre expertise, DeJesus argued that the most important aspect of his approach is his ability to identify and execute the producer's intentions for a record. "First, I generally listen to figure out, sonically, what is the concept of the mix — from the interpretation of the vocals, to how the producer tried to express his musicality," DeJesus said.

"I'm not there to know what they were going for when they created the song, but they trust me enough to know how to figure it out," he continued. "And they trust that I'll add my own touch to it, then give them something back that, if it's not exactly what they were looking for, is better."

The Essence of Efficient Workflow
DeJesus starts all of his mixes by opening Pro Tools HDX interface, then sends his mix through Yamaha NS10 monitors, to which he's been devoted for much of his mixing career. And, while one could argue that seven Grammys prove DeJesus' process needed no fixing, as of this past year he has added a new element to the mix. "Without a doubt," DeJesus said, "the first plugin that I put up is Sonarworks Reference 4, because I want to make sure that whatever I'm listening to is flat."

When a colleague recommended Sonarworks Reference 4 to DeJesus claiming the flat response could allow him to start mixing on headphones, But once the software was installed and set up to deliver calibrated audio to his room, DeJesus said that he realized he would never need to go out to his car to check his mixes again. "After mixing 30 or so songs with Sonarworks, I knew I could be confident about what I was hearing.

"That added confidence alone speaks volumes," DeJesus said — but, in addition, it helped him to learn the imperfections in his own room, solving any future monitoring issues he might have otherwise run into. "I would say, even if you have a room built by Frank Manzella — still, try this software in the room. You will be surprised."

With many projects on his plate and also in the queue, DeJesus has established a consistent workflow with some choice tools to help him stay efficient. In addition to using Sonarworks Reference 4, he will reach for his Waves SSL G-Channel, which he uses as his primary EQ and dynamics plug-in on all his mixes. DeJesus is currently working with DJ Nelson as well as busy mixing a new album for Huey Dunbar, the Grammy-nominated tropical artist who combines jazz funk and R&B sensibilities. Soon after that, he will be mixing a new album New York City-based Funk Salsa Urban, which is pushing new boundaries in the salsa music genre. 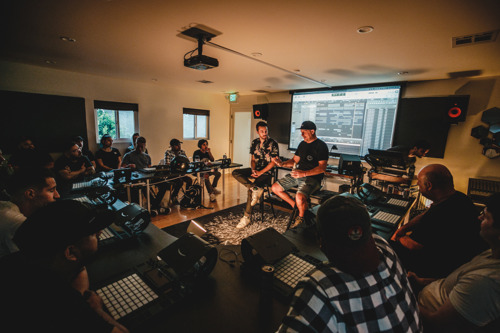